Activate the soil microbiome under your feet with organic matter dense materials.

Soil testing assesses potential threats and needs, underlying soil quality issues and environmental conditions that harm turfgrass and benefit weeds and pests. One can never assume that fields and turfgrass require the same fertilization and input schedule each year.  Too much of a nutrient or input can stress the turfgrass plant and lead to future problems, including pollution. For example, excess nitrogen (>.2 lbs per week) causes turfgrass to grow too fast resulting in thinner cell walls and requiring more water.  Conducting a soil test once every one to three years sets data points to ensure application of the right quantity and type of input.

The soil test should measure the following characteristics:

pH impacts the availability of nutrients. Turfgrass excels at a neutral to slightly acidic pH between 6.5 to 6.9. Most soils in the Midwest fall within this preferable pH range or are more acidic (i.e. lower pH). Incorporate compost and products with high organic matter for soils with high pH/alkalinity. Managers should only lime low pH soils when a soil test recommends it.

Calcium, which ensures proper cell division, and magnesium, that aids with photosynthesis, may have limited availability in low pH soils.  Both calcium limestone and dolomitic limestone will raise pH and calcium levels. Only dolomitic limestone, however, will add magnesium to soils. For soils with balanced pH levels, Gypsum adds calcium and Epsom salt adds magnesium without affecting the pH.

To start, EarthWorks tested the soil at all fields. "We look at our soil testing like doing blood work on the human body. Soil is a living and breathing organism," explained Chad Kuzawa.

EarthWorks received soil test reports from Logan Labs for each of the four parks. In these tests, EarthWorks focuses on the excesses or deficiencies of important macronutrients such as sodium, calcium, potassium and magnesium. This data, added with information about the soil's cation exchange capacity, provides EarthWorks important insight about how "tightly" the soil holds on to these nutrients.

Kuzawa can answer the following questions when equipped with this information, "is the soil really holding on to the nutrients? Is it leaching those nutrients away? Is the soil so tight that we may have the nutrients available, but they're bound up in the soil and not being released to the plant?"

The soil testing resulted in a unique set of recommendations for each of the Grand Rapids parks, because the parks had different aesthetics and soil chracteristics. For example, Kuzawa detailed EarthWorks' recommendations for the downtown Heartside Park, "We felt EarthWorks 5-4-5 was the best course of action because we determined the soil at the park was "biologically weak" and deficient of both phosphorus and potassium." 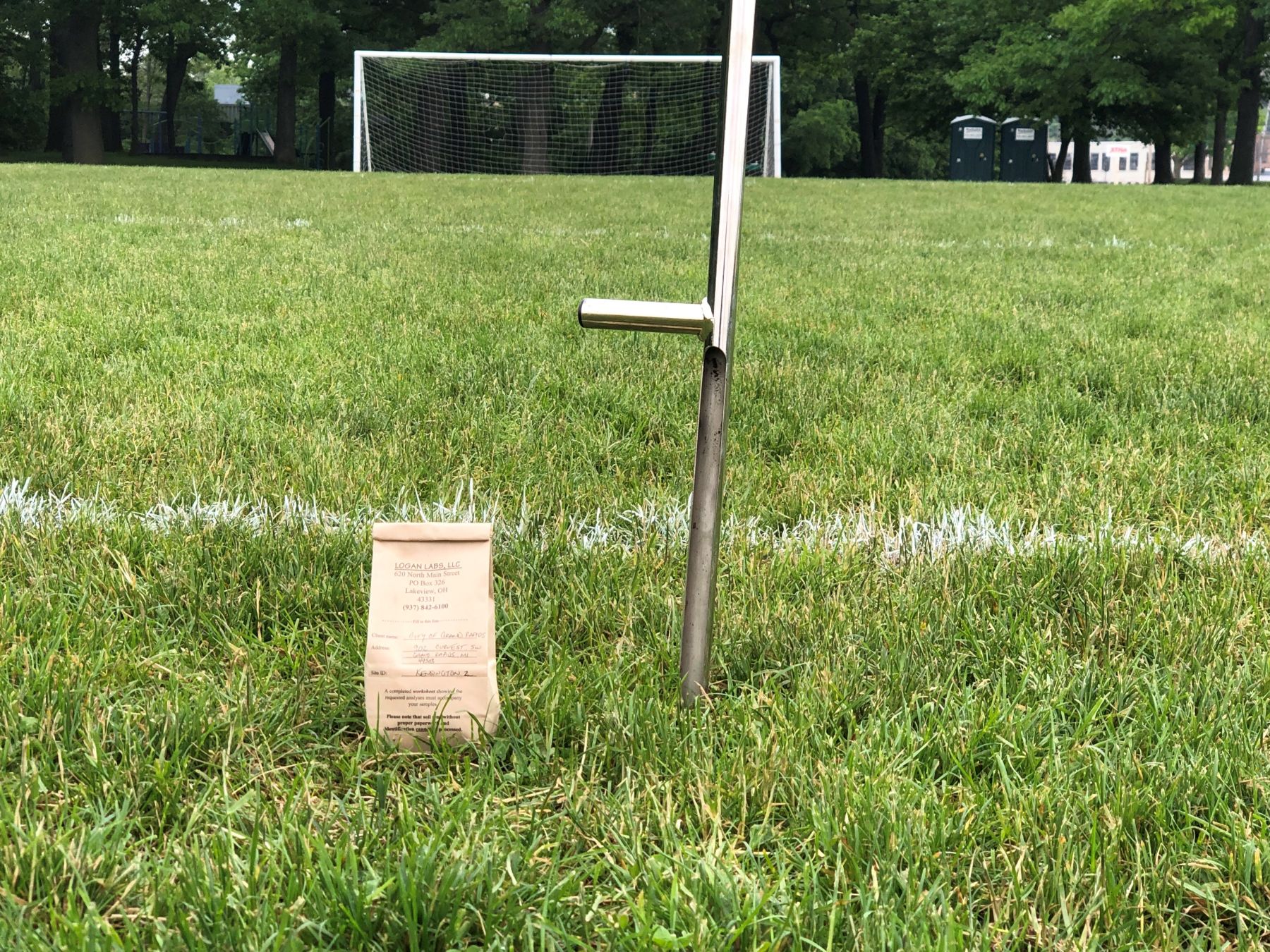 Billions of organisms reside in every cubic foot of soil, otherwise referred to as the microbiome. Measuring the health of the soil microbiome requires evaluation of six functional microbiological groups of:

Strategies that benefit the microbiome include:

Threats to the microbiome include: 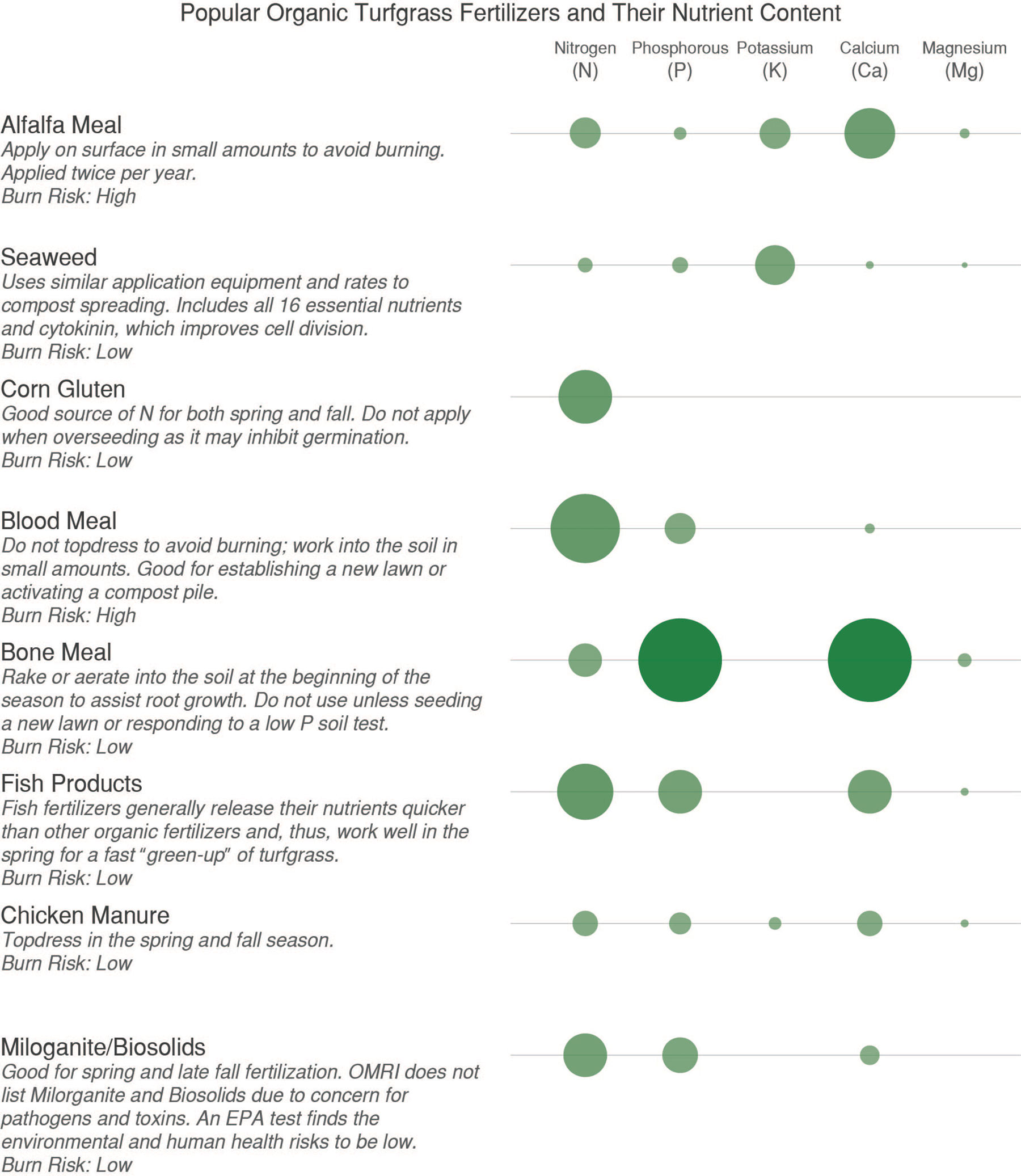 Carl Gorra, the Parks Operations Manager for Naperville Park District, initially applied organic products to his parks to reduce the environmental and health risks to his staff and park patrons. Today, however, these products provide an essential service to ensure his turfgrass recovers and excels.

“The beauty of organic fertilizers is that they feed the soil. In healthy soil, the compaction goes away, the pore space is greater, there’s more oxygen in the soil and it accepts moisture more readily,” Gorra explained.

Gorra has observed decreased weed, disease and pest pressures on his fields after using organic products for a couple of years. 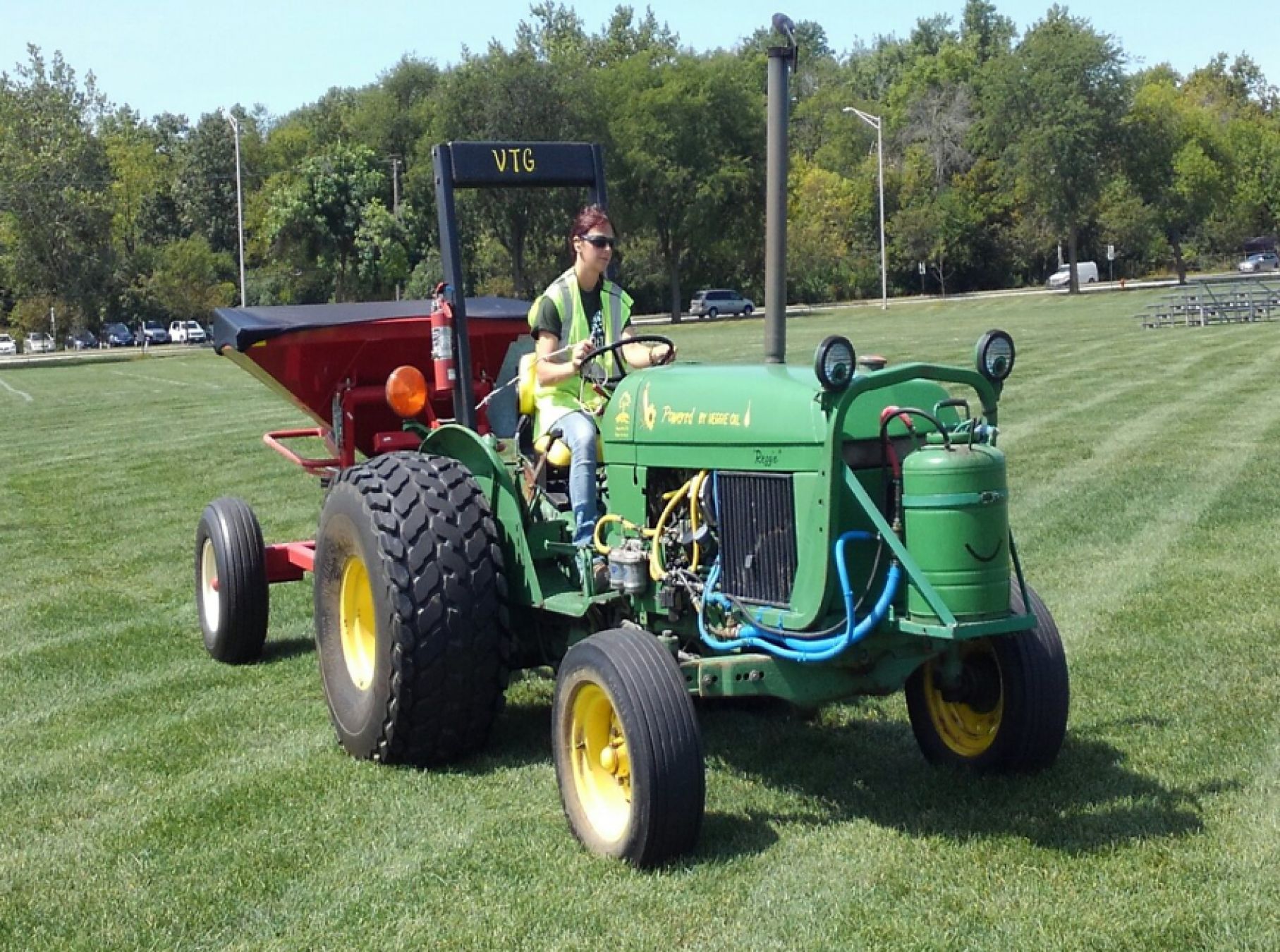 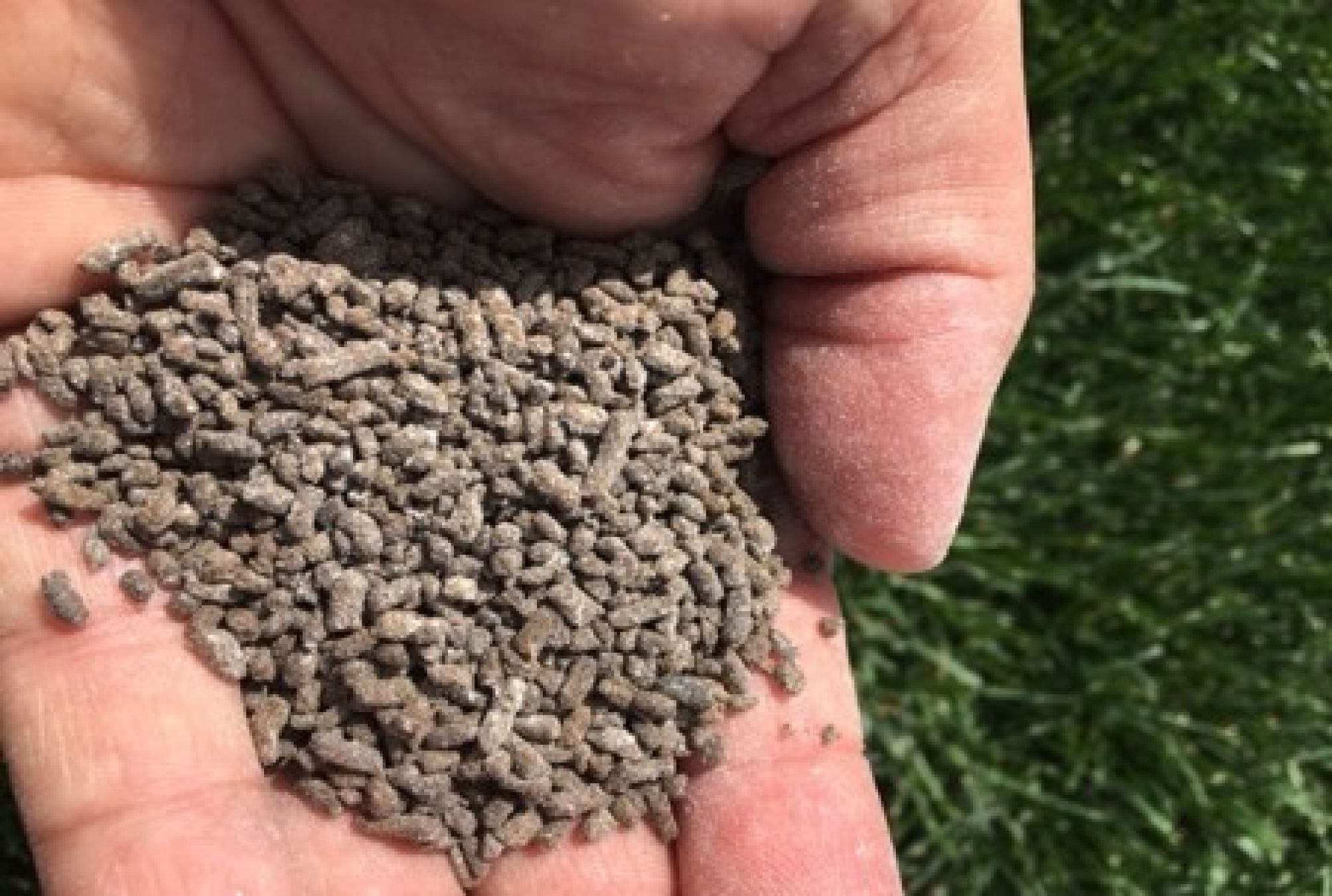 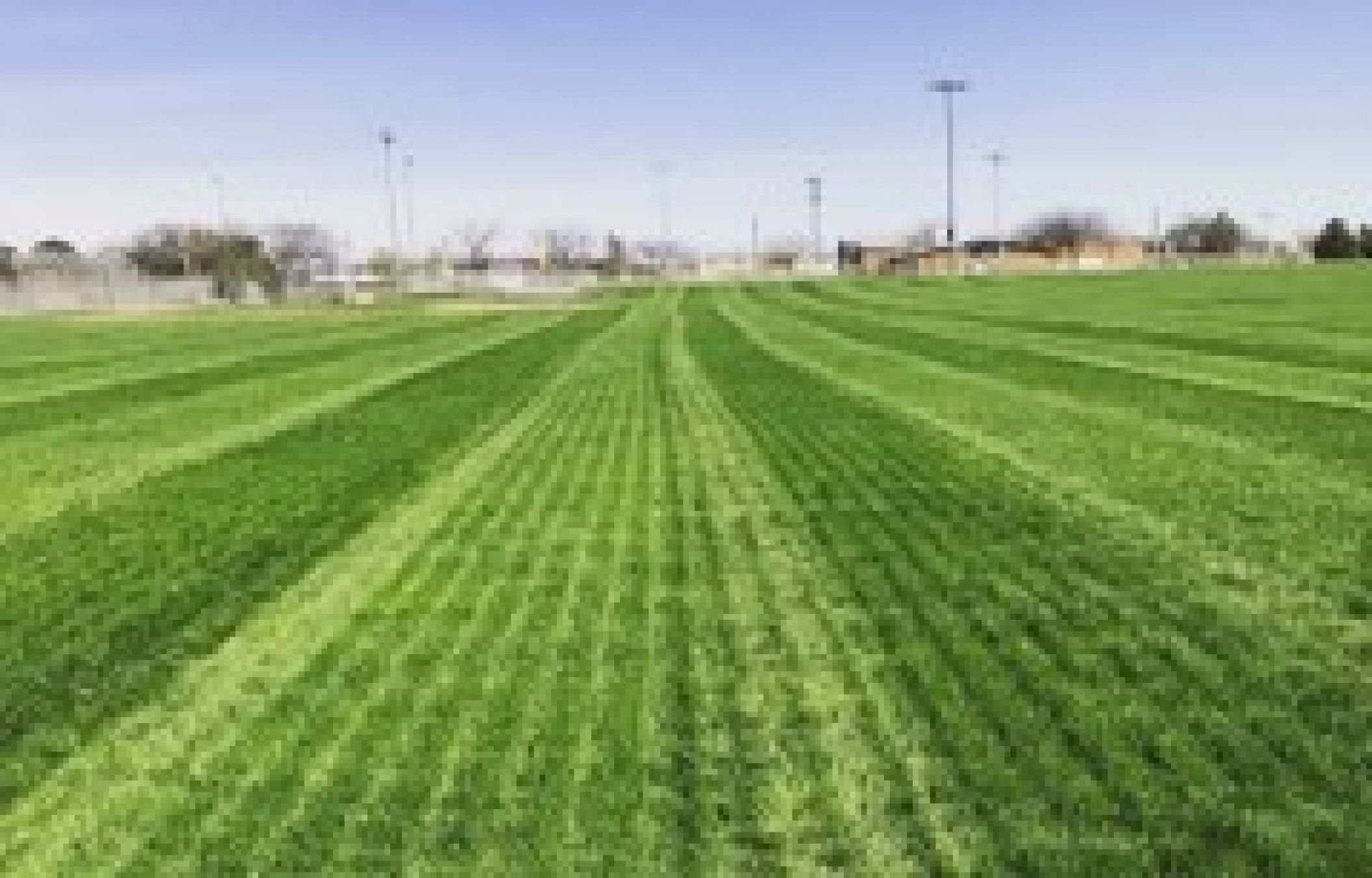 Compost achieves best results in the spring and fall seasons when applied at a depth of 1/4" and 1/2". Hollow tine aerate to incorporate compost topdressing into the soil profile of established turf.

Compost teas stimulate the effects of compost by extracting the microbial life and nutrients, which improves the accessibility of both for plants.  Effective use of compost teas requires their application very soon after production. Compost teas have been credited with improving germination rates and decreasing establishment time of new turf, while increasing depth of established turf.

After witnessing these impressive results, Dinelli made permanent changes to his 30 acres of fairways by putting down an 1/8” to ¼” of compost each off season. This program required investment in new equipment, an Orbit compost screener and a TYCrop MH400 $20,000 top dresser. The results of this particular program justified the initial high price of equipment and labor. “Whatever I spent on compost I was spending on fertilizer, which the nutrient rich compost replaced” explained Dinelli.

However, Dinelli cautioned that composting costs are site-dependent. “I’m lucky that I can get biosolids. If further away from the City of Chicago you might have a hard time getting compost material,” said Dinelli. “Being such a bulky material, you have to do your homework and see what’s available for you in your area.”

If looking into implementing a compost topdressing program, Dinelli recommends starting with a couple of test fields and building from that point. “A simple google search can help you get started sourcing compost and once you get in a network it grows from there,” Dinelli concluded. Dinelli frequently uses resources from the US Composting Council to find suitable compost sources for his grounds. 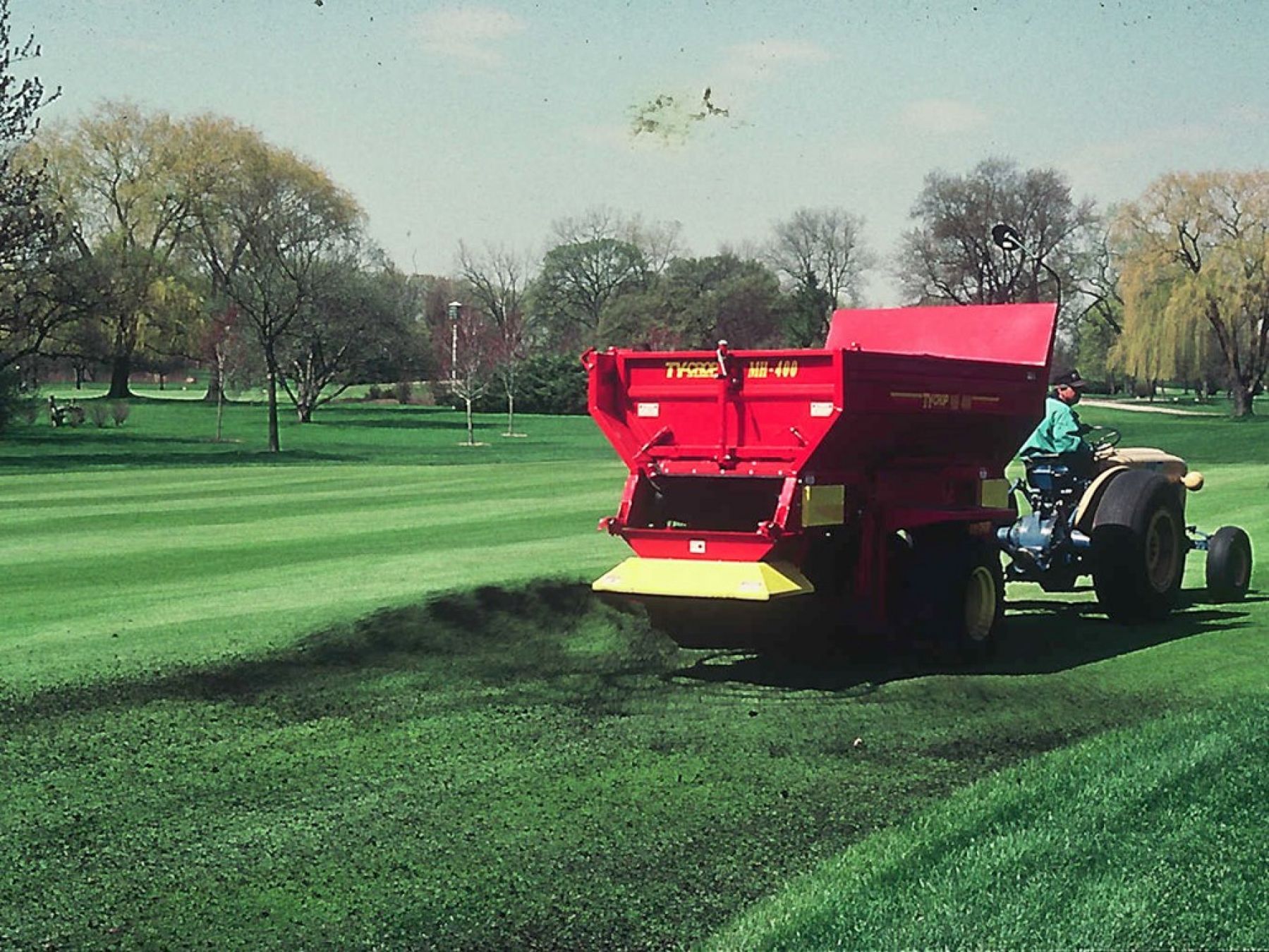 Compost application on North Shore Country Club. The spreader is a $20,000 TYCrop MH400 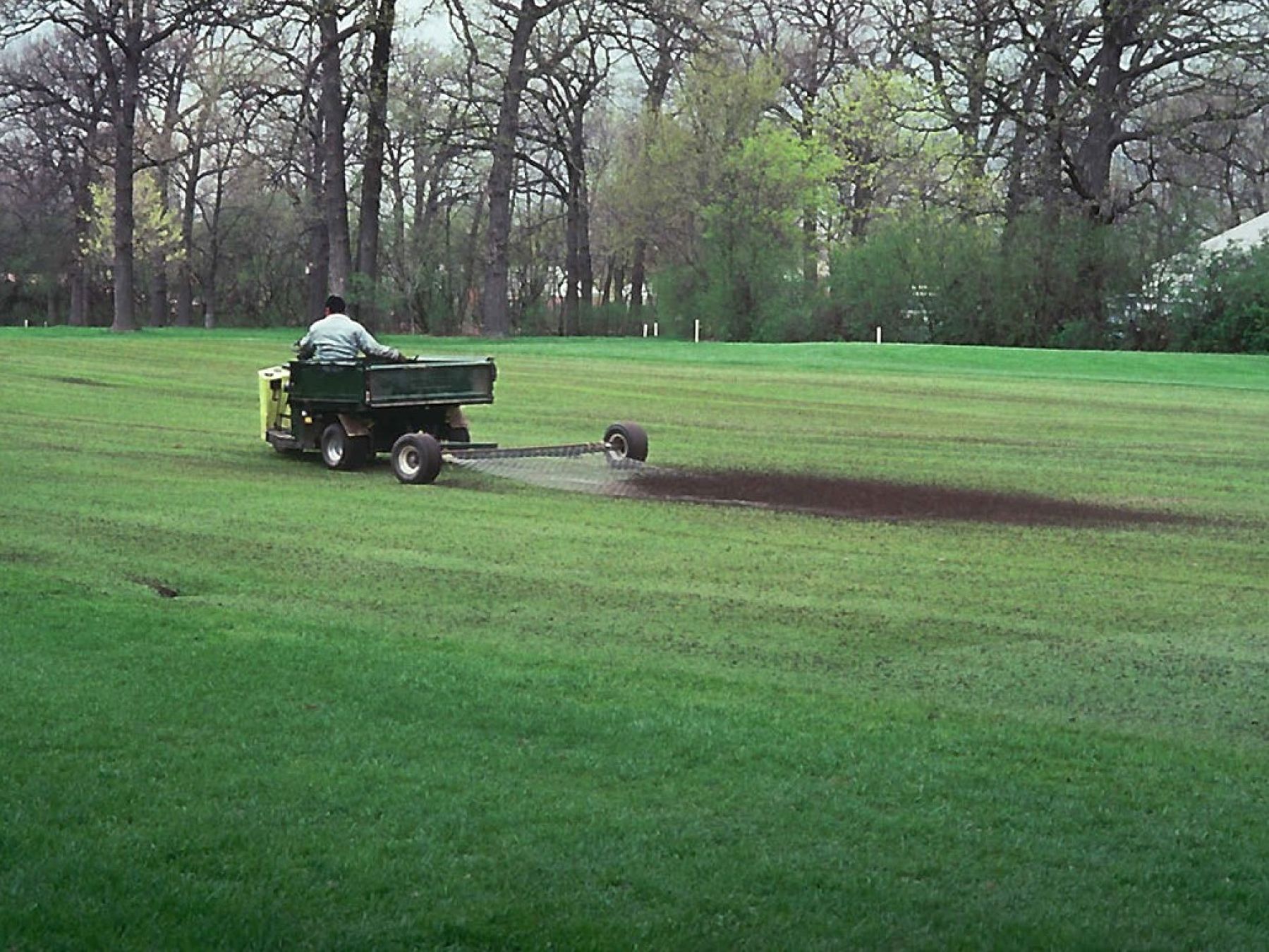 North Shore Country Club uses a chain link fence to work compost into the fairways. North Shore applies about an 1/8” to ¼” of compost on their fairways each year. 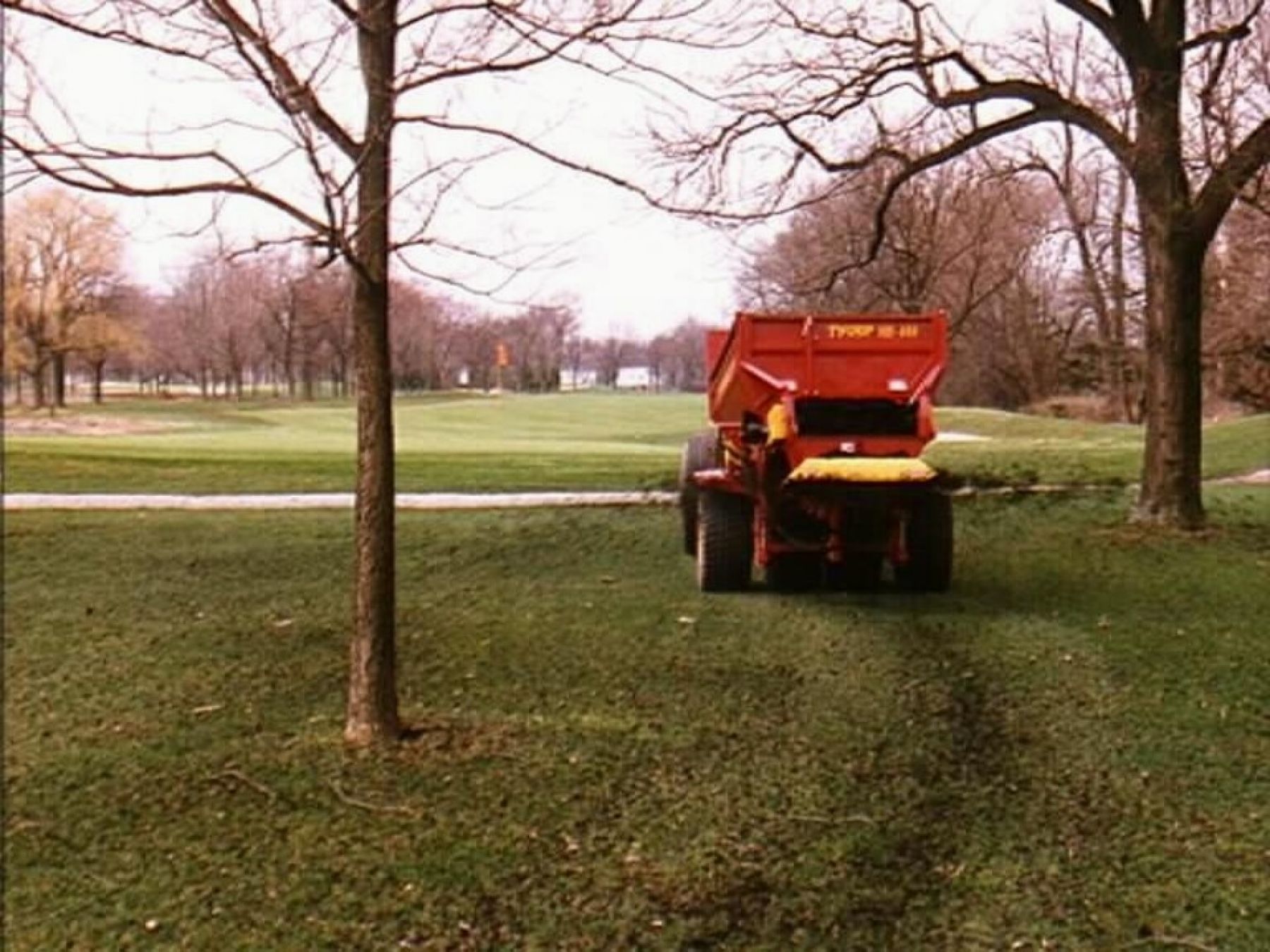 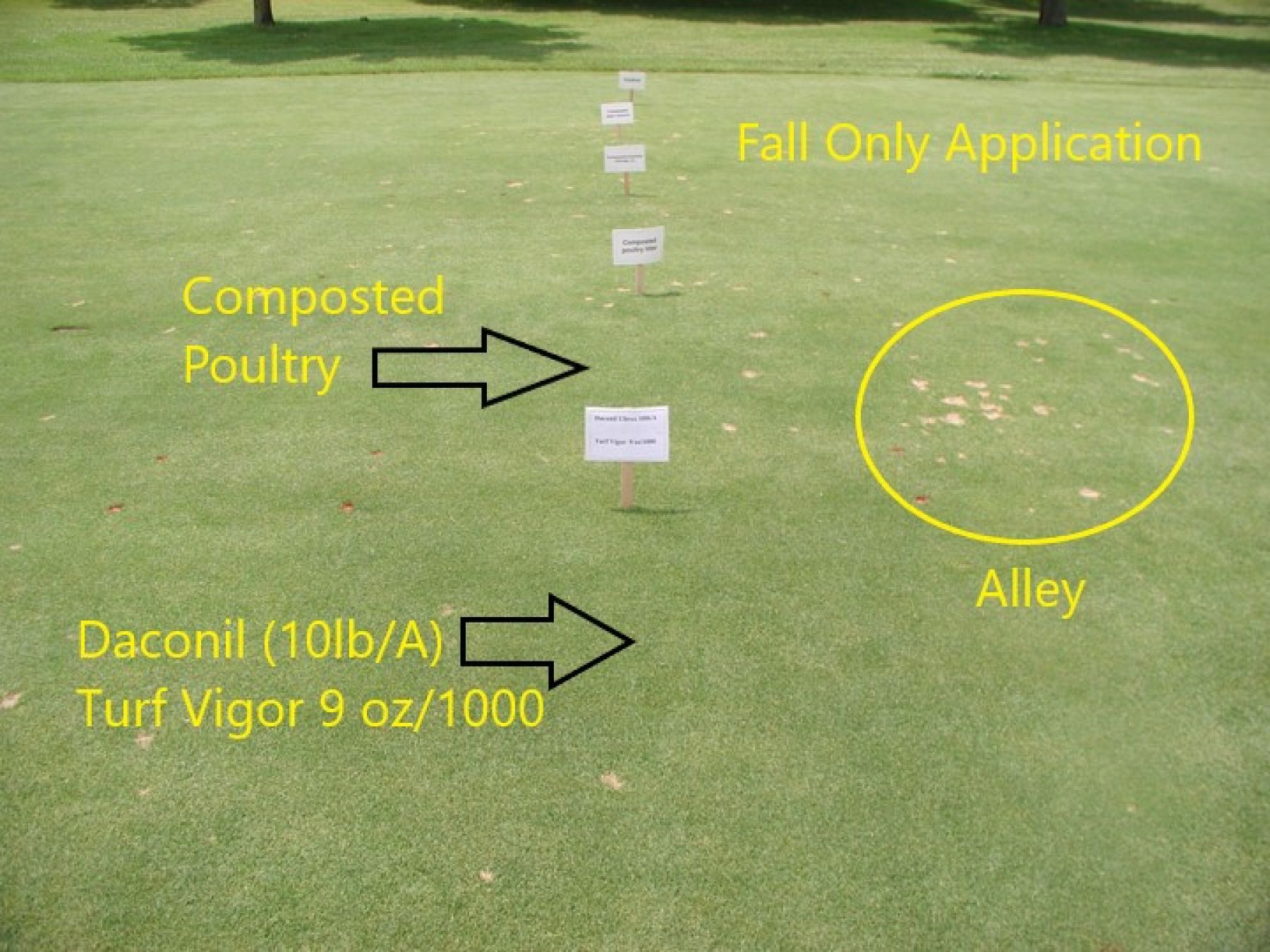 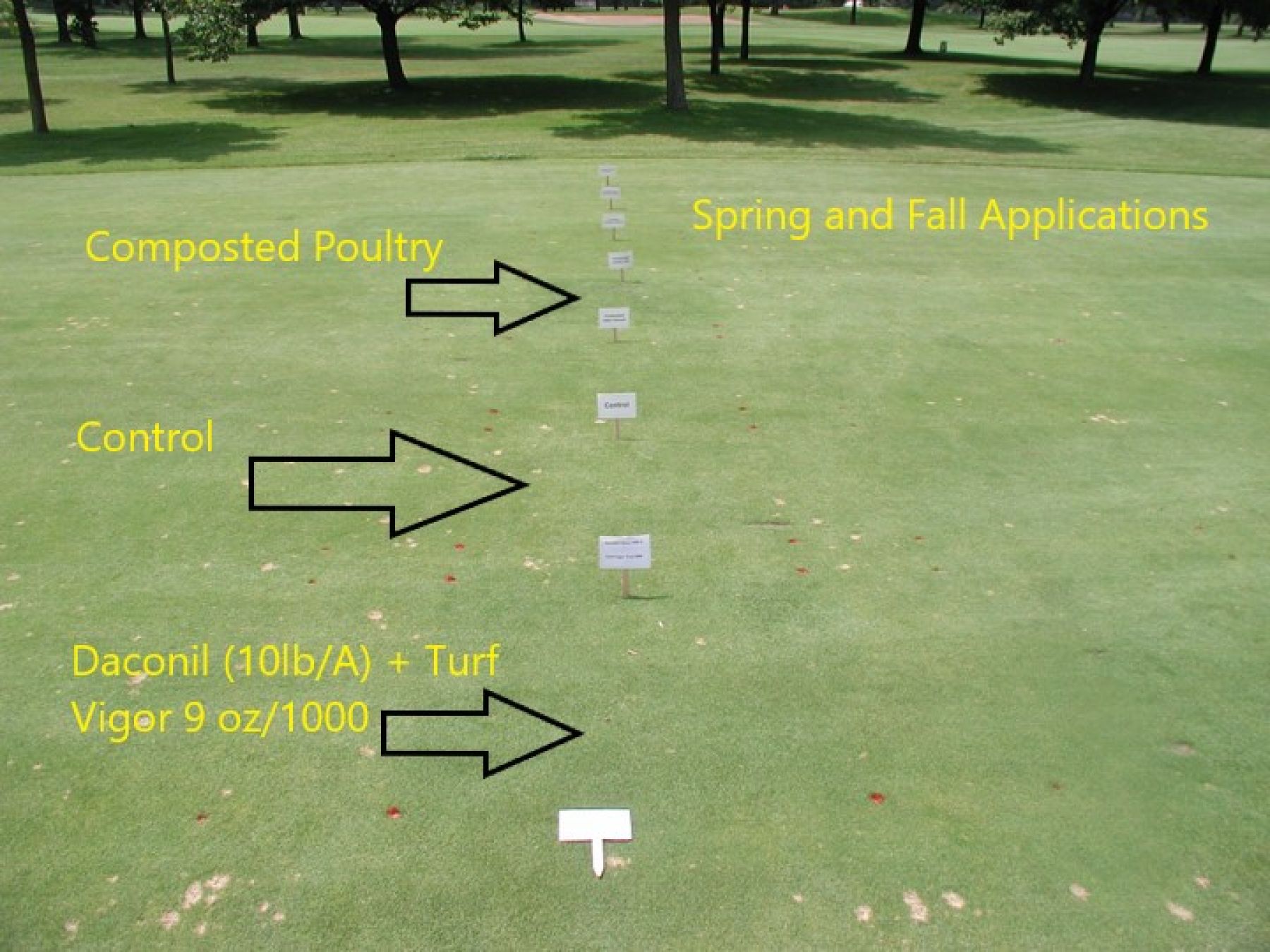 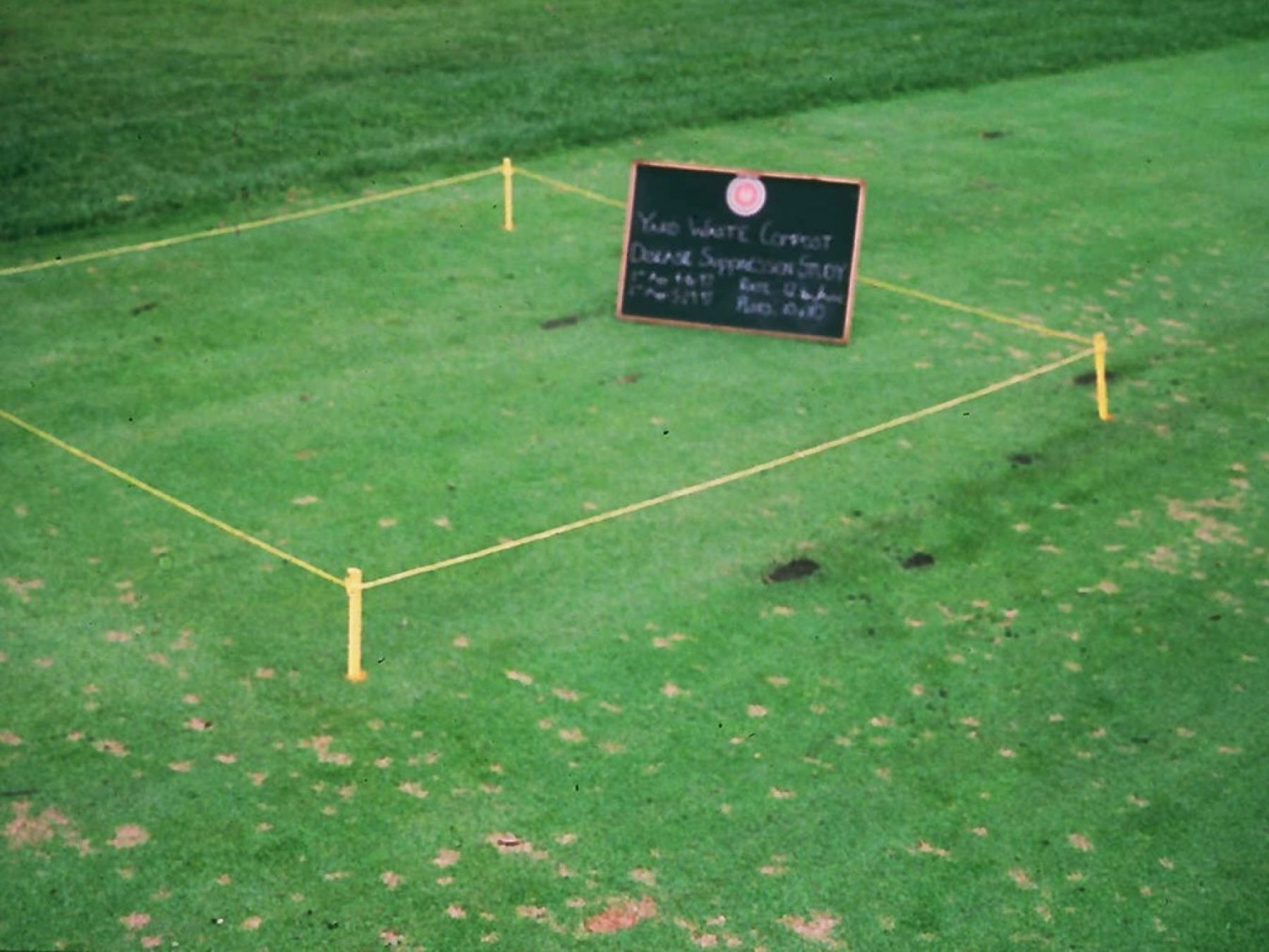 Scott Tess and the City of Urbana partnered with MGG and the Urbana Park District to pilot a compost topdressing and natural lawn care program on two fields of the .7 acre Canaday Park baseball field and the .5 acre Urbana City Building south lawn. The City of Urbana participated in this pilot program to grow healthy landscapes for wildlife and visitors and to market the organic materials produced by their own Landscape Recycling Center (LRC).

"We're completing the loop, our landscapes are generating these trimmings and we're bringing it back to the landscape to increase the soil fertility and grow stronger and healthier turf," Tess said.

Thanks to funding from the Lumpkin Family Foundation, the City of Urbana purchased an Eco 150 - Ecolawn Compost Applicator to incorporate LRC garden screened compost on the two pilot fields.  The City of Urbana and Urbana Park District first core aerated their fields and then spread the compost. The city followed this treatment schedule twice on the Urbana City Building south lawn in September of 2019 and April of 2020 and applied a total of 22 cubic yards of compost. The park district applied 15 cubic yards of compost once on the Canaday Park ballfield in September of 2019. Both managers plan to apply compost in the fall of 2020.

Weed control and fertilization costs for both fields increased in the first year of management. Based on LRC compost rates of $30 per cubic yard of compost, the City of Urbana spends around $660 per year on compost topdressing and the Urbana Park District spends $450 per year. Previously, the City of Urbana spent $200 per year on weed control and fertilization at the Urbana City Building. Meanwhile, the Urbana Park District spent $245 per year at the Canaday Park ballfield.

Tess praised the results in year one at the Urbana City Building, "We didn't have any significant diminishment of turf quality. The anecdotes from our landscape crew was that the turf is thick, it's healthy and some bare spots were filled in."

Soil testing, also, indicated high soil microbiological performance on the two pilot fields compared to two fields managed with synthetic pesticides and fertilizers. MGG contracted with Midwest Bio-Tech to conduct two Solvita tests of BURST and SLAN on all four fields. BURST measures the pounds of CO2 released from a soil sample in 24 hours. The SLAN test reports the pounds per acre of amino-N available for crop production. Higher values for both tests indicate higher microbial activity. As seen in the table to the right, both pilot fields significantly outperformed the conventionally managed fields in the BURST test after one year of management. Meanwhile, the Urbana City Building was the only field to increase in the SLAN test after one year. MGG's soil scientist, Vytas Pabedinskas, said the microbial activity in the Canaday baseball field may need more compost and molasses to increase the nitrogen fixation at the site.

"I encourage anyone interested in this type of work to reach out to MGG," Tess said. "They have a scientific and behavioral science approach that achieves results." 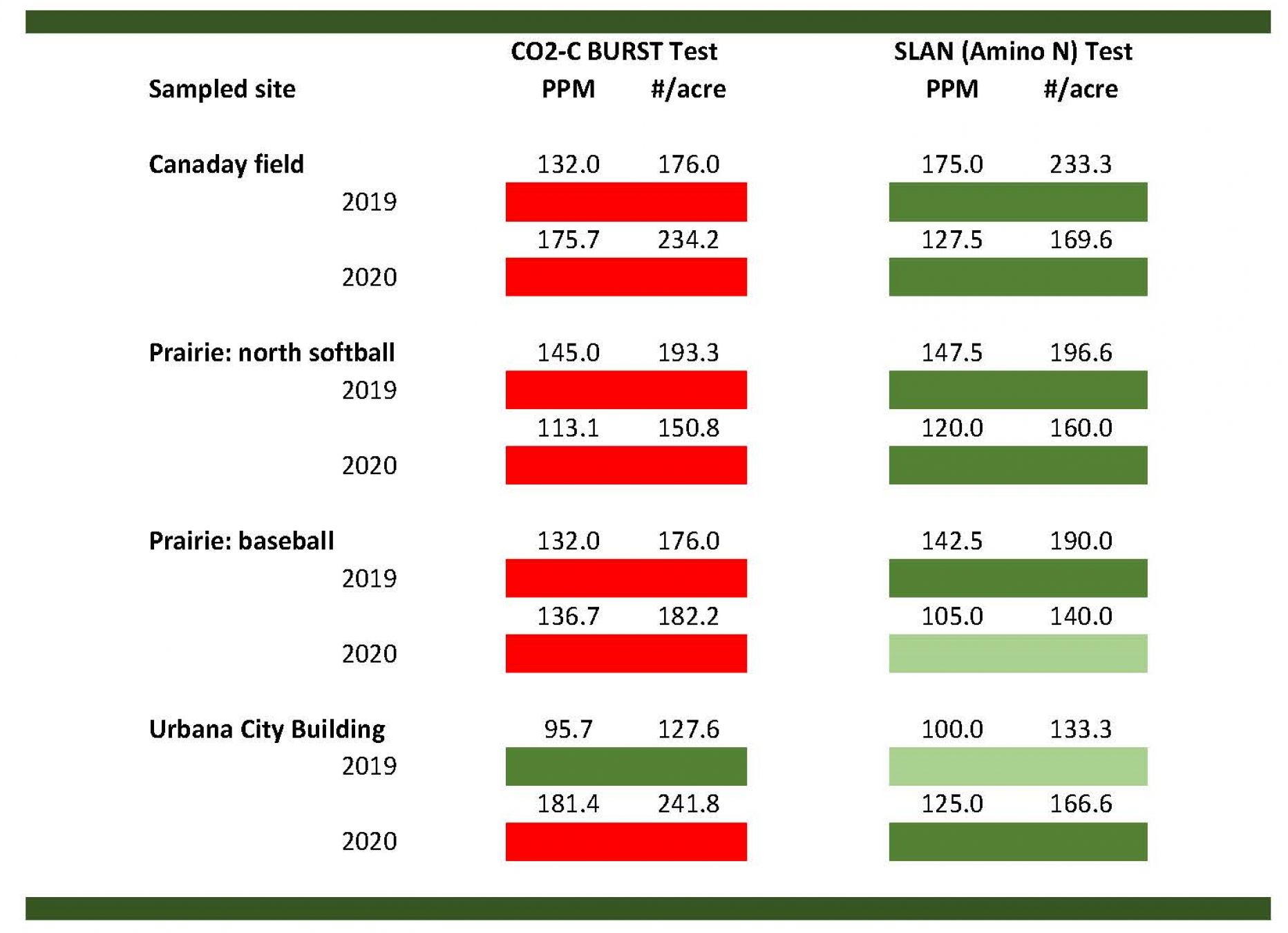 Solvita test results from the Urbana compost topdressing pilot program. Soil samples were taken in the summer of 2019 and 2020. MGG and partners implemented natural lawn care on the Urbana City Building and Canaday Field. The Prairie softball and baseball fields were managed conventionally. 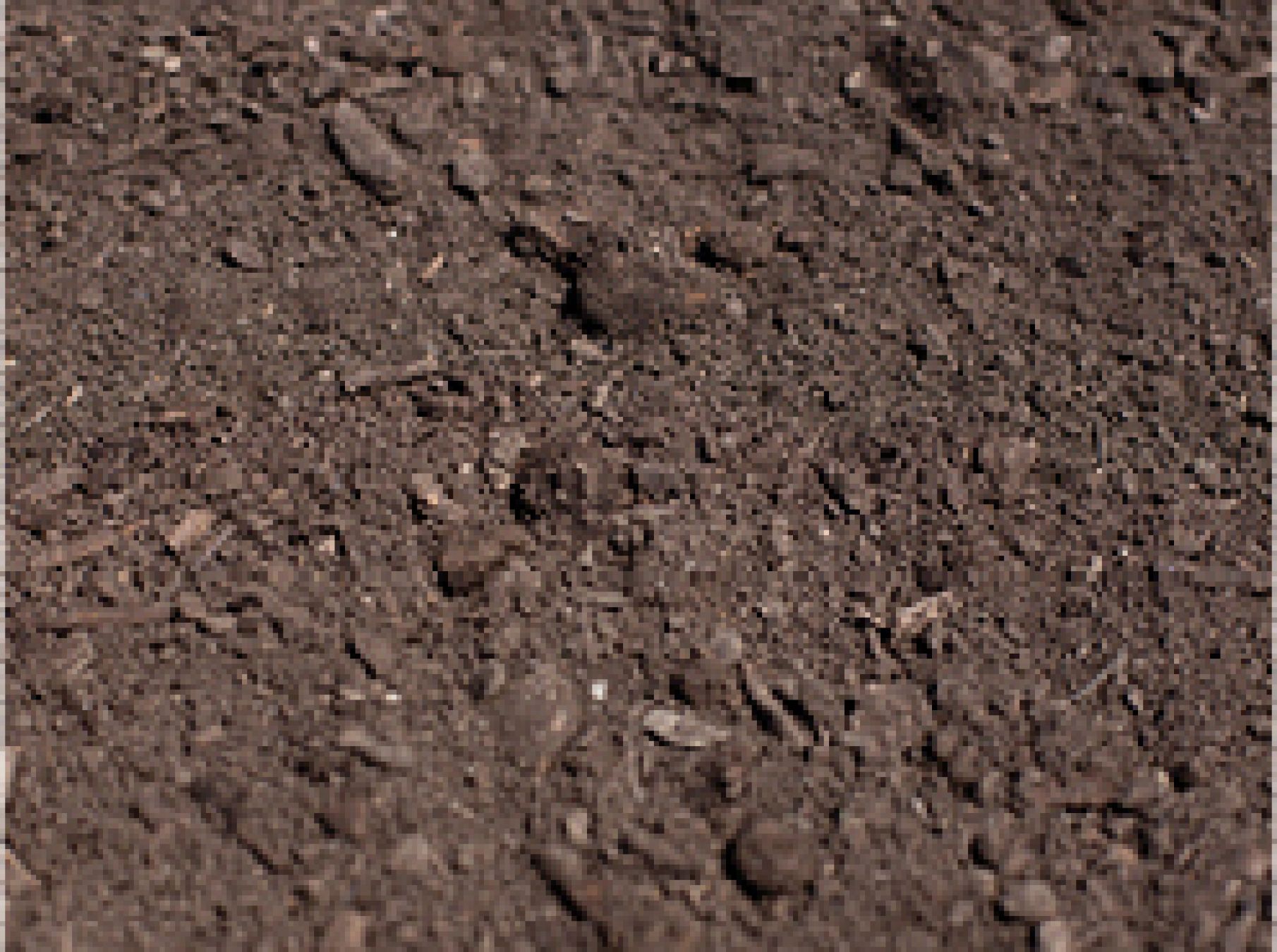 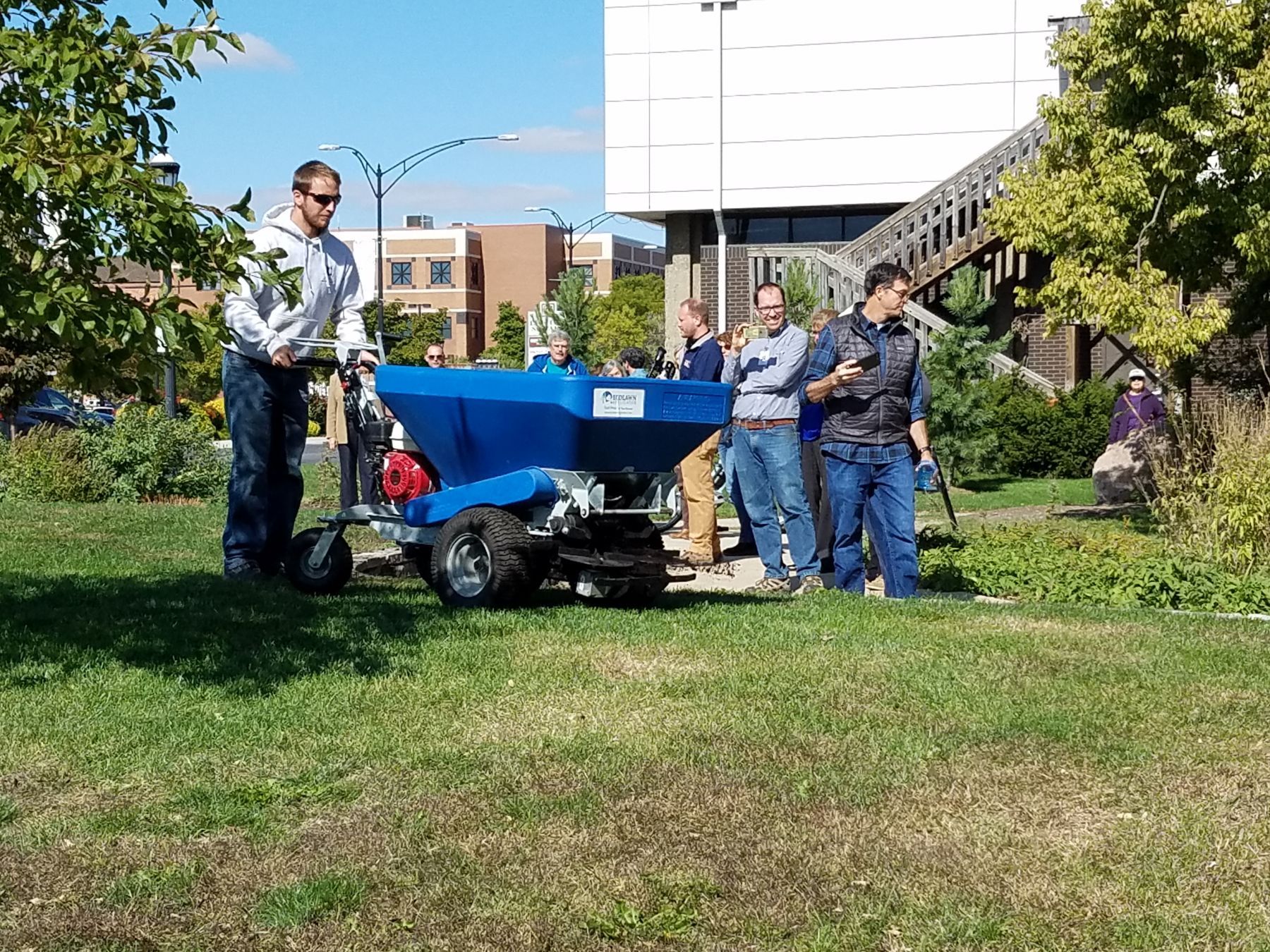 Application of compost to the Urbana City Building south lawnb 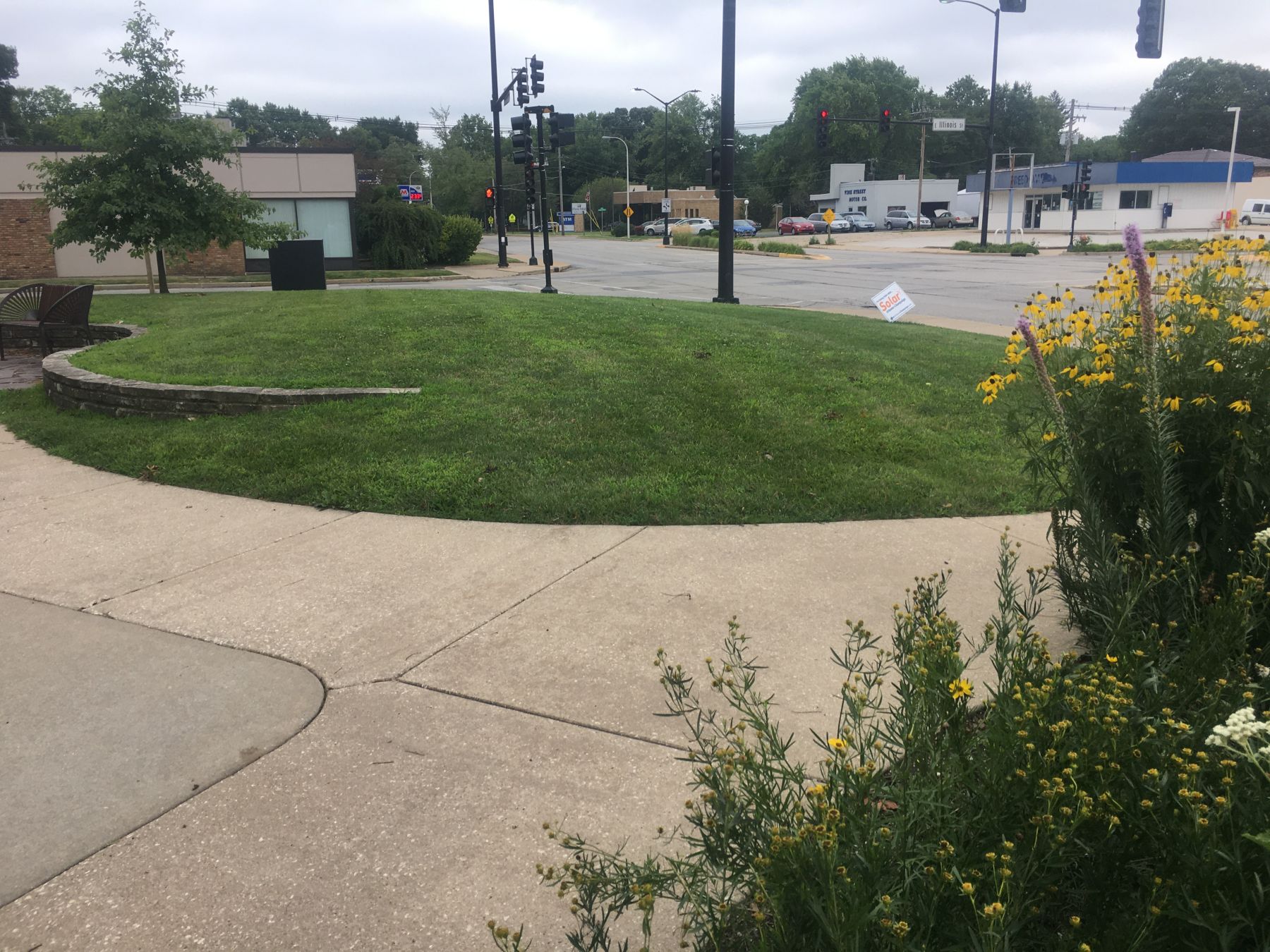 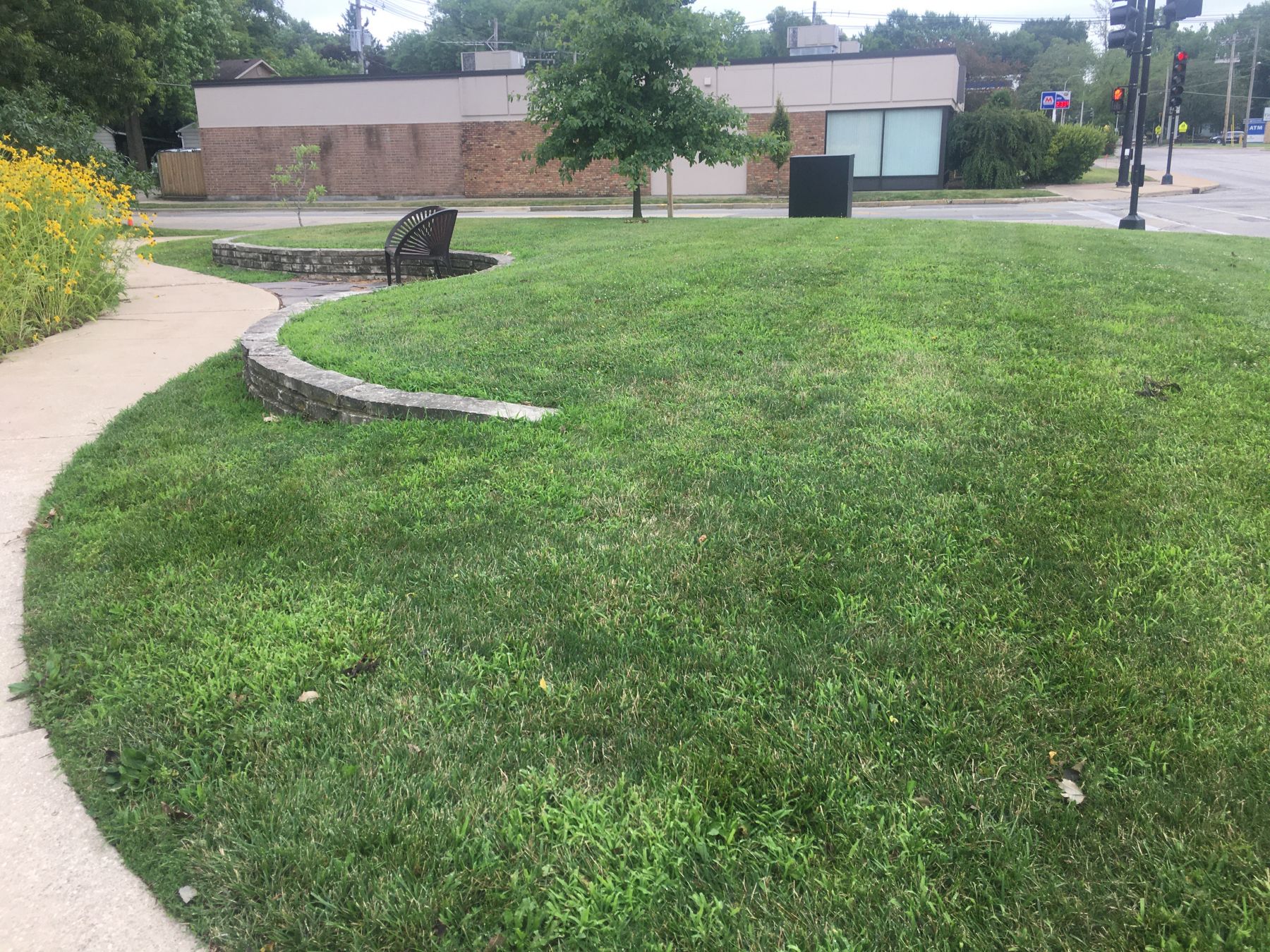 Another angle from the south lawn in the summer of 2020 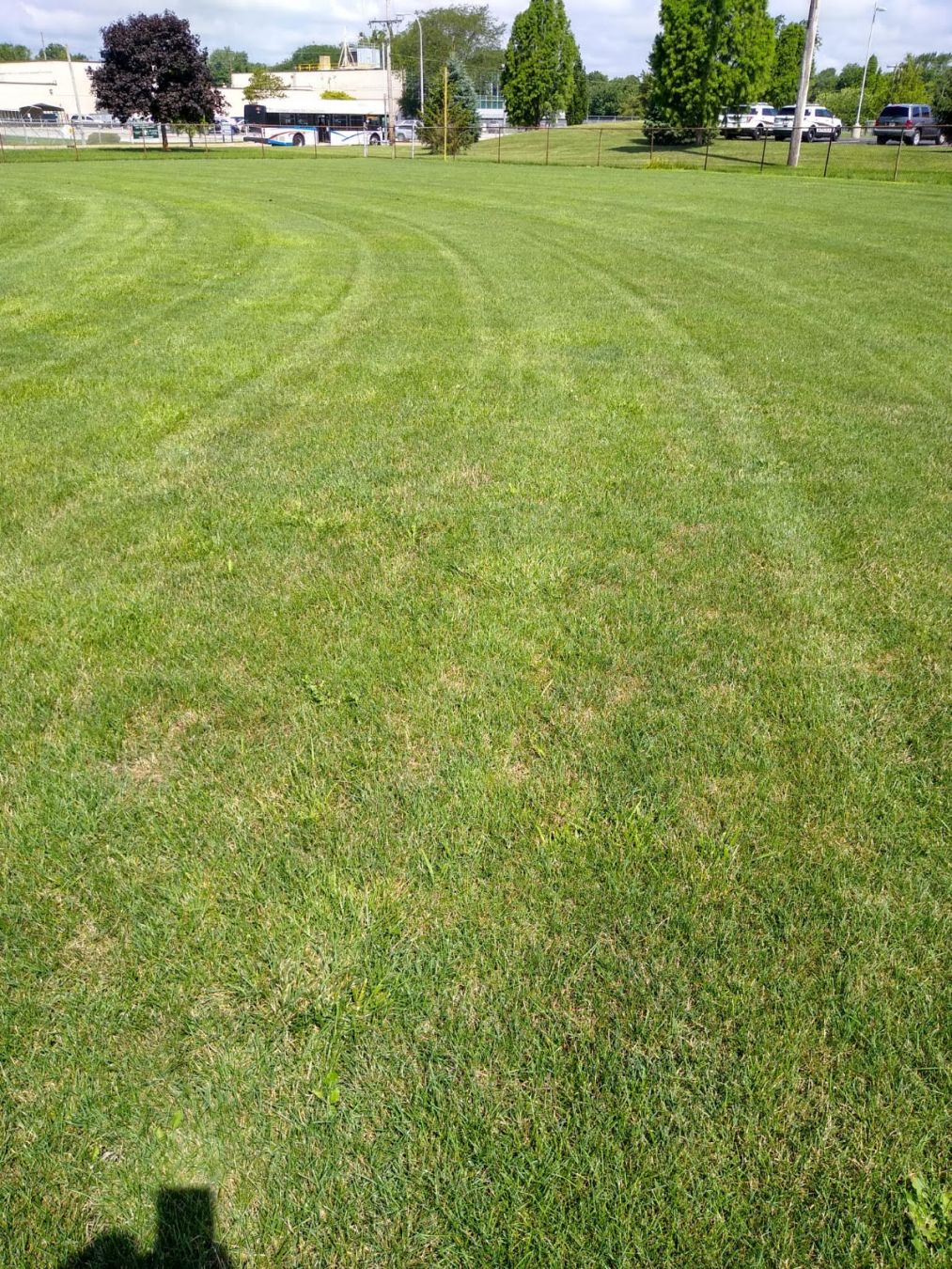 Canaday Park baseball field in the summer of 2020

Created through a process called pyrolysis, where biomass is heated to high temperatures in the absence of oxygen, biochar resupplies the soil with carbon which mimics the native soils of temperate grasslands. The high carbon content of biochar increases porosity of soil and the retention of both water and nutrients. Biochar can initially increase the pH of soil so application rates should be small. 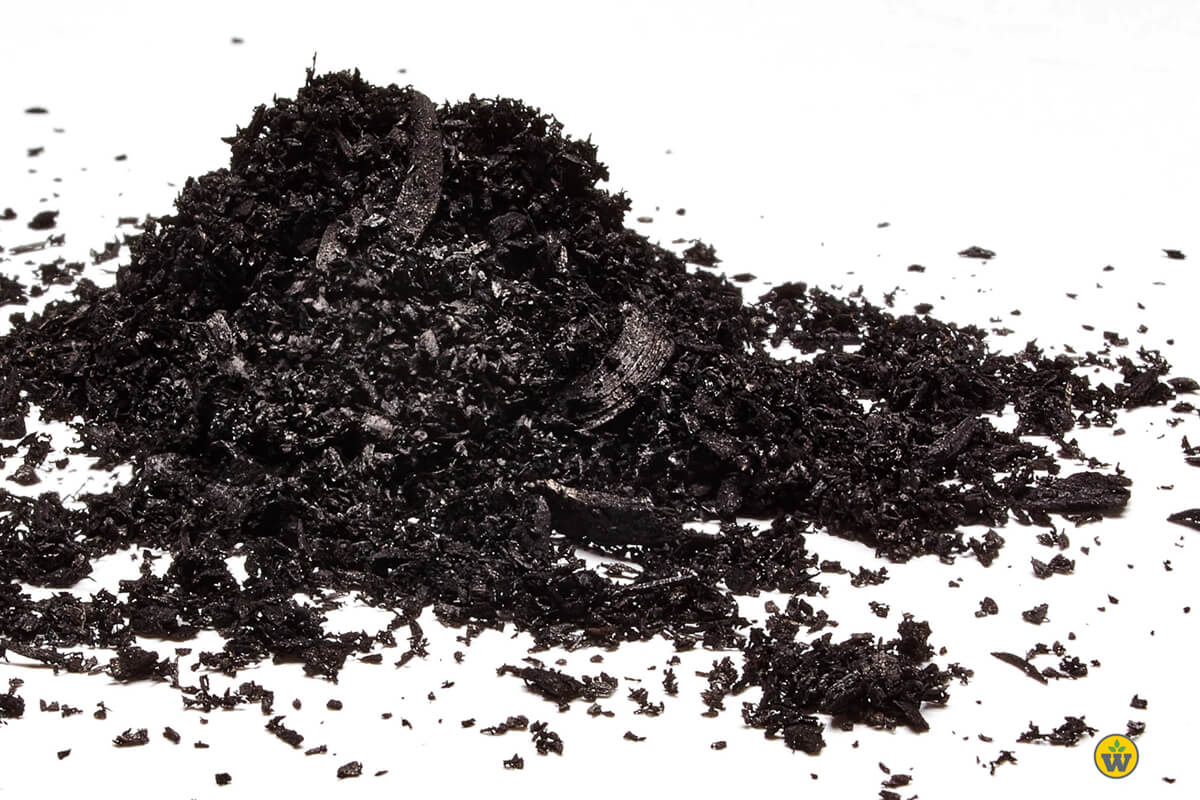 Ron Malchiodi started researching biochar two years ago for the “care and betterment” of his fields.  Riverside first used the product produced by Wakefield Biochar in the outfield for a baseball field at Harrington Park.  This pilot visually demonstrated to Malchiodi the benefits of biochar.

“You can see a green rectangle in a sea of brownish grass.  It was very detailed as to where the product was used and the effects of it,” Malchiodi explained.

This success encouraged Riverside to apply biochar on the rest of the 1.2 acre Harrington Park and on both Indian Gardens park (2 acres) and Centennial Park (.5 acres.). Riverside only applies biochar once per year on the sites in the late fall to early winter when field use declines.  Outside of biochar, the Village applies minimal herbicides and fertilizers.

The Village of Riverside framed its use of biochar as an initiative to improve the parks and frequently informed residents of the initiative through word-of-mouth, social media and E-Blasts. Malchiodi said his department has not received any complaints about the initiative and only compliments. He believes this initiative has the potential to spread to all of Riverside’s parks. 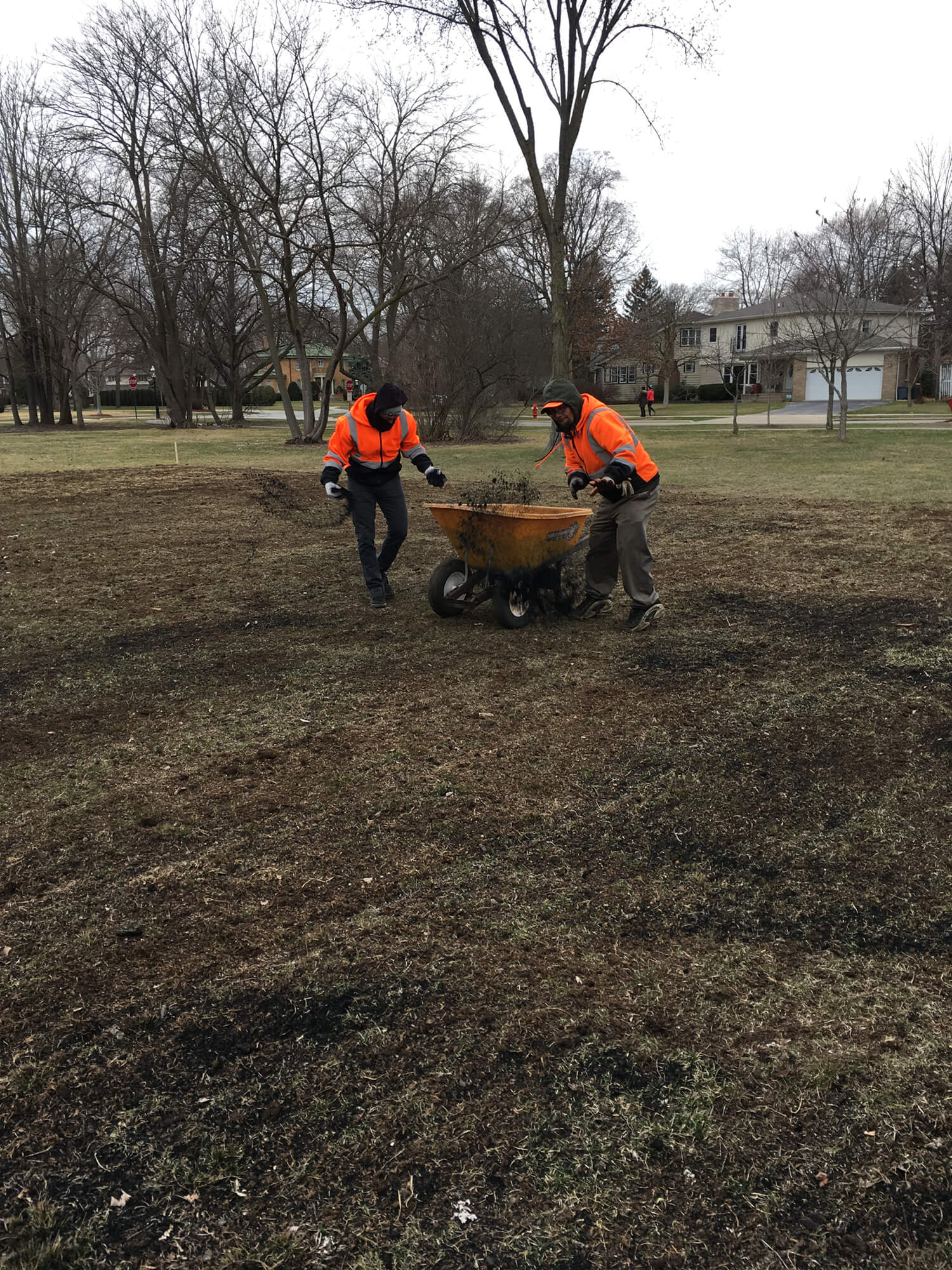 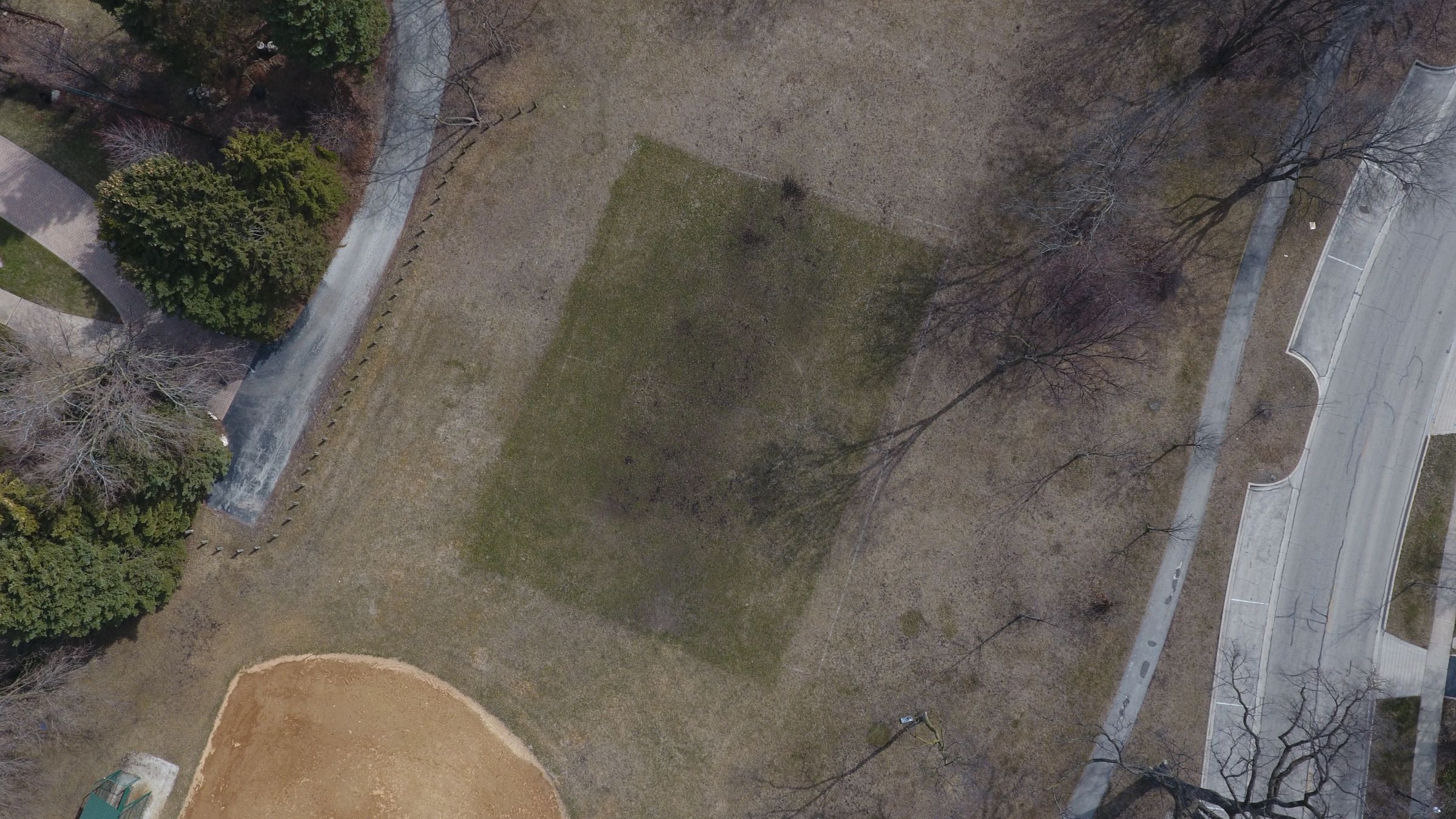 Depending on the structure of a particular soil, inorganic soil amendments such as calcined clay or gypsum can effectively supplement organic amendments for improving both drainage and water holding capacity.

Calcined clay is used most commonly as a soil amendment in baseball infields to smooth out depressions, absorb excess water after rainstorms and improve water management in general.

When applied in the appropriate environment, gypsum can replace excess sodium with calcium to improve water movement and soil structure. Gypsum will not raise or change pH as opposed to lime. 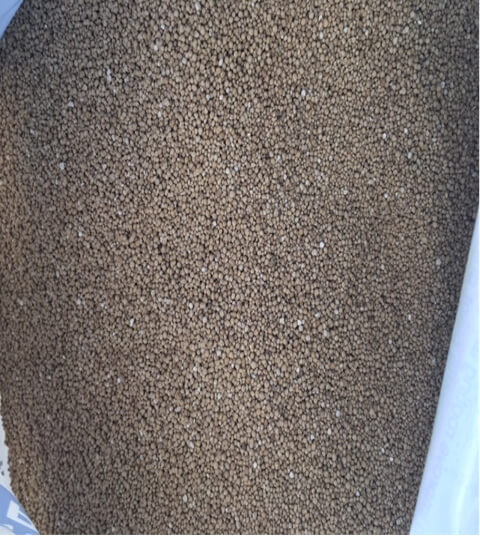